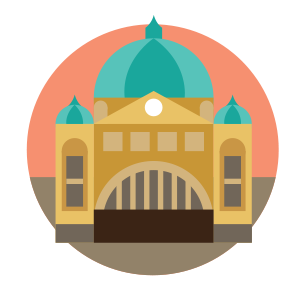 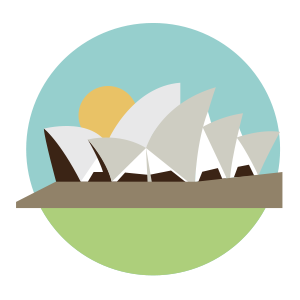 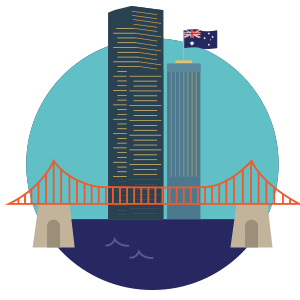 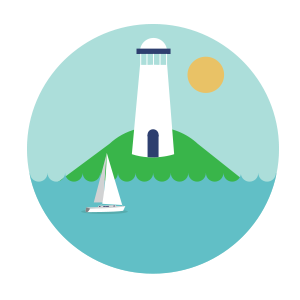 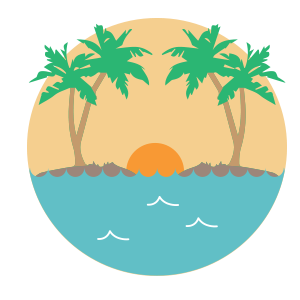 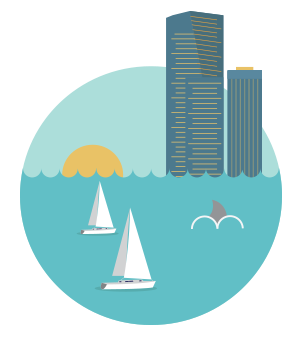 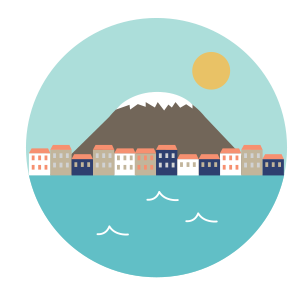 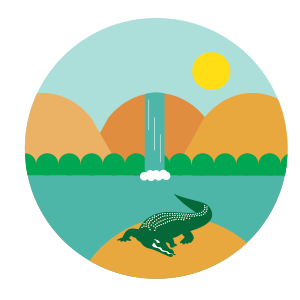 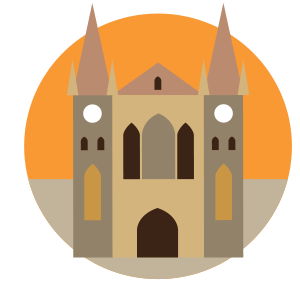 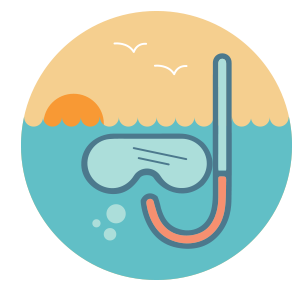 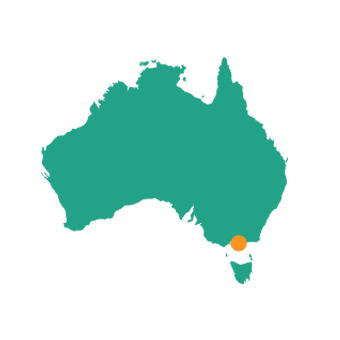 Melbourne was chosen as the most liveable city in the world for 6 consecutive years. It is Australia’s art, fashion, gastronomy and sports capital. Over 150 languages are spoken in this multicultural city and it has what is considered the most effective public transportation in Australia.

Melbourne is Australia’s cultural capital and offers a schedule continuously filled with musical, food, film and art festivals. It is also the only city around the world to offer a Motorcycling Grand Prix, as well as Formula 1 and the Tennis Grand Slam. It is also widely considered to be one of the shopping and leisure capitals of the world.

Melbourne’s hidden alleys, bars and international restaurants are good examples of its multicultural richness. You’ll be able to try different cuisines every day: Spanish, Italian, Greek, Korean, Malaysian, Colombian and more! You will also find some of the best coffee shops in the world on the famous lanes across the city.

Public transport is free around Melbourne’s downtown and it’s considered to be the most effective in Australia. During your first tour of the CBD you’ll see the frantic economic activity of the area, with stores open seven days a week.

Melbourne has mild winters and lower temperatures than other large cities in Australia. It is also known as the city with four seasons in a day. 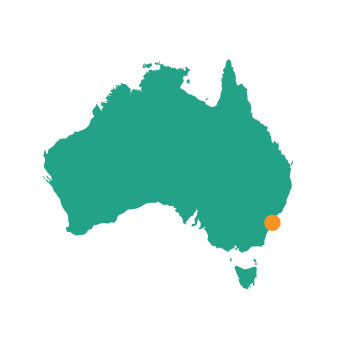 Sydney is the capital of New South Wales, and it is also Australia’s most internationally recognised city. It is admired because of its amazing harbour and the well-known Opera House. Some of the main sights include the Darling Harbour, Circular Quay, as well as the striking Harbour Bridge and the amazing Botanical Garden.

There are over fifty beaches surrounding the city. Bondi Beach and Manly Beach are internationally known. Also, you can’t miss the famous boat tours as the city is surrounded by spectacular cliffs and small charming beaches.

Nightlife and leisure are Sydney’s strengths. Surry Hills, the Rocks and Newton are attractive neighborhoods for creative and active people. Aside from the wide array of cultural offerings, Sydney is a great place for an Aussie experience if you’d rather just surf and enjoy nature.

Sydney is a main industrial and economic area, and it is in fact the place in which many of Australia’s main companies are based. It represents 25% of the economic activity within Australia in diverse areas such as services, manufacturing, fashion and finance.

Life in Sydney is very expensive. The weather is hot during the summer and mild during the winter, not quite like the cold we know in other parts of the world. There is abundant rainfall throughout the year. 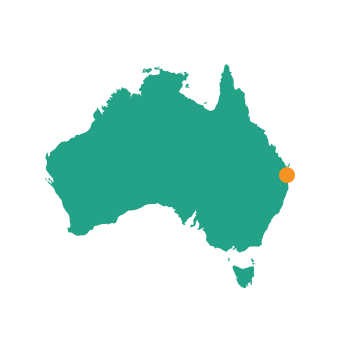 Brisbane is the capital of Queensland, known by many as the Sunshine State because of its high temperatures and sunshine hours. You’ll find amazing surf beaches just a few miles away from the city, which is also close to breathtaking natural landscapes.

Brisbane is an important creative and innovation center with many academic institutions and world class facilities. With a population of 2 million Brisbane is the third most populated city in Australia.

It has a subtropical humid weather, with a warm summer and a mildly warm winter. It’s a very safe community spirited city. During recent years, Brisbane has become a very attractive city for international students.

Brisbane is multicultural and cosmopolitan. You’ll love to go shopping around Queen Street Mall or enjoy the views of the Brisbane River and its surrounding skyscrapers. It’s a large city relatively close to small paradises such as the Sunshine Coast and Byron Bay.

Brisbane has a higher unemployment rate than Sydney and Melbourne. There are fewer opportunities to find qualified jobs compared to larger cities. Despite being very close to the coast, this city doesn’t have beaches. 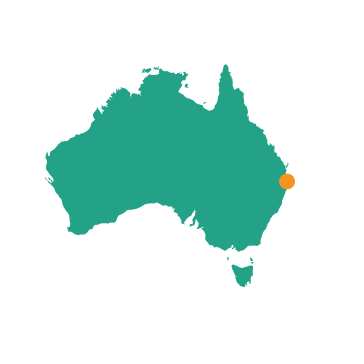 Gold Coast is a popular destination for younger travellers. This city is located in the east coast and is globally known for its beaches and the good vibes around its streets.

After catching a few waves or visiting some of the best natural parks in Australia, Gold Coast offers excellent restaurants and nightclubs throughout the city.

Over the past years, tourism in the area has grown. Even if locals don’t seem to enjoy this much, it seems unavoidable that tourism will keep growing due to the city’s appeal.

This is undeniably an ideal destination to go on holiday or study for a while, although it must be noted that there are fewer job opportunities here than in other cities. 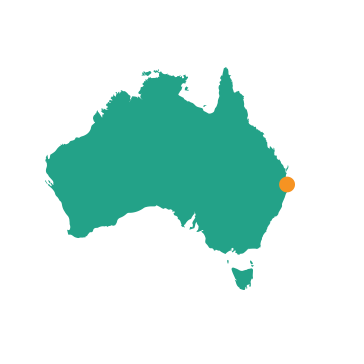 Byron Bay is a beautiful small town surrounded by nature and full of surfers, within a very hippy environment. As soon as you get there you’ll feel you’ve arrived to the Australia portrayed in postcards.

You get hooked on Byron Bay, probably because it’s surrounded by exuberant landscapes, wildlife and vegetation. Although tourism in the area has grown over the past years, it still has an alternative uplifting spirit to it.

You can complement a good surfing day at Byron Bay with activities such as scuba diving, barbecues by the beach or simply enjoying the sunset at Main Beach or the lighthouse. On a clear day, you’ll be able to see the changing colours as the sun goes down.

Byron Bay is an art loving town. You will see artists on the streets and musicians at every corner. Byron Bay can be considered a hippy sanctuary since it’s very close to Nimbin, one of the places where the movement originated.

A career in Byron Bay can be difficult to get. This is a small town and the jobs you can aspire to are mainly not qualified. Despite that, jobs can be hard to get because there is a lot of competition due to the number of travellers. 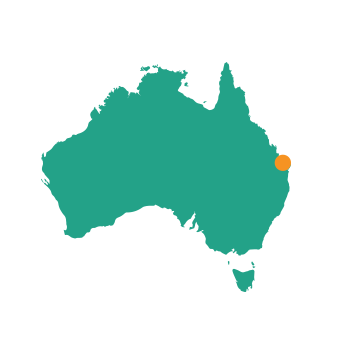 Noosa is a quiet town, perfect for relaxing and living the authentic Australian experience. Whether it’s spotting koalas, hanging out up high in gum trees, hiking or enjoying its spectacular water channels, in Noosa you will be immersed by the Australian nature and wildlife.

This corner of Australia combines the purity of a remote place coupled with the activity one would expect from an urbanized city. Spectacularly, you will find a national park featuring amazing nature and Australian wildlife situated right in the heart of the town and on the door step of the main street where you can find the best restaurants, stores and bars the town has to offer.

Many people arrive to this beautiful destination for a vacation and enjoy going shopping in its many little shops where you can find almost everything.

The weather is subtropical, with plenty of rainfall and heat, even so, that is the essence of Noosa and what facilitates the unique natural surroundings it offers. 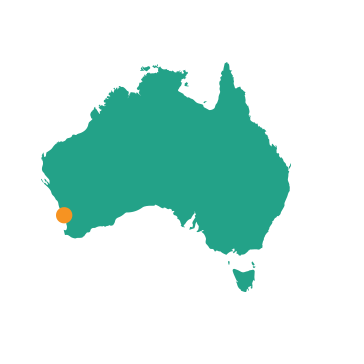 Perth is the capital city of Western Australia. Currently it is a vibrant, energetic city that offers a truly unique experience. Perth is the fourth largest city in Australia and home to 1.9 million people.

The region has enjoyed flourishing economic growth primarily driven by the mining and resources industry. As the results, it is not surprising for Perth to become the state with the lowest unemployment rate.

In Perth you will be able to immerse yourself in a diverse mix of city culture and stunning nature, from Perth’s burgeoning bar scene and open arts festivals, to its world-class beaches and expansive parklands.

You can move around the city free of charge using the public transport. This is an important
component as in many other main Australian cities, public transport is expensive.

Perth is rather isolated from the rest of Australia, separated by thousands of kilometres of desert from the other capital cities. Perth also has a rising cost of living, correlating with the
recent economic boom experienced. 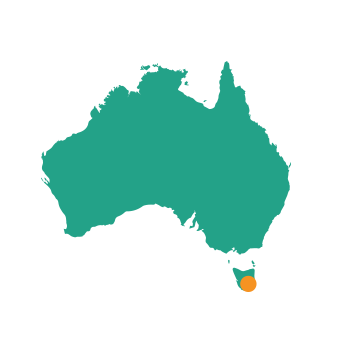 Hobart offers a contrasting blend of heritage, scenery and culture, with world class activities and attractions nearby. It's no wonder Lonely Planet has called Hobart one of the top ten spots to visit in the world right now.

Hobart is Tasmania's capital city and the second oldest capital in Australia, after Sydney. Located at the entrance to the Derwent River, its well-preserved surrounding bushland reaches close to the city centre while beaches line the shores of the river and estuary beyond.

With its captivating history, picturesque waterways, rugged mountains and gourmet experiences, the city has something for everyone.

Tasmania is one the most privileged islands from nature’s perspective, with more than 2,000 kms of tracks and more than 18 natural parks.

It rains a lot in Tasmania and it has by far the coolest climate of all of Australia. If we go even further south, we’ll encounter Antarctica. 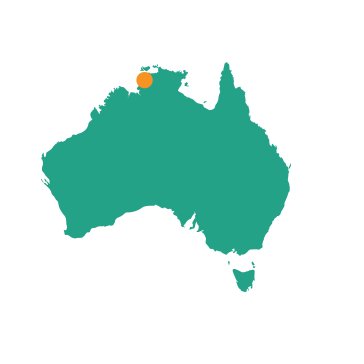 Darwin is the state capital of the Northern Territory. It is a small and very remote city, surrounded by an amazing landscape.

Darwin is the most northern of Australian cities. It is also the gateway to some of Australia's most breathtaking National Parks. It has tropical weather and is a melting pot of food and culture.

Another attraction of the city is its indigenous aboriginal population. Aboriginal people were the first to live in this country, thousands of years before the arrival of Western culture. We firmly suggest learning more about the indigenous people to get a better understanding of their rich and unique culture.

Darwin is a city with almost an endless summer with a totally tropical landscape. Lots of sunny days and high temperatures make it a calm and happy place.

The intense heat of the northern city of Australia and the difficulties of being able to enjoy a beach day due to the fauna hazards. 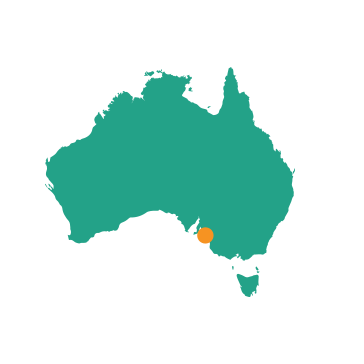 Adelaide is the state capital of South Australia. It is dubbed the wine city and has been living up to its reputation by producing some of the best wines in the southern hemisphere.

Adelaide is the most affordable major city in inland Australia. It is also rated the
fifth most liveable city in the world by the Economist Intelligence Unit in 2015.

Other attractions include the tours available from the capital of South Australia, mainly Kangaroo Island or Port Lincoln, where you can swim with sea lions, dolphins and tuna fish, and for those who dare, even swim in a cage with the great white shark.

Some people refer to Adelaide as the “20 minute city”, stating you can go from one side of the city to the exact opposite in less than 20 minutes. It is a city full of parks and surrounded by nature.

Because it is in the south, there is an important difference between winter and summer,
with unpredictable temperatures, mainly very cold in winter and very high in summer. 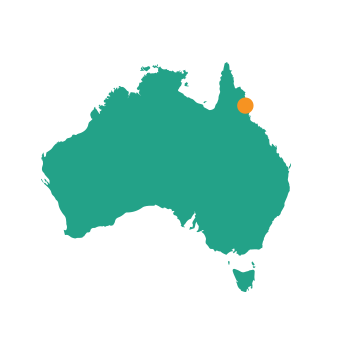 Cairns is the most northern city of Australia’s east coast. It is also the starting point of boat trips going to visit the largest coral reef of the world, the “Great Barrier Reef”.

The city is located in the tropical region of Australia, thus, it is surrounded by an abundance of unique wilderness of an exquisite nature. Dangerous Australian wildlife co-exists with the usual residents. In the north of the town, you will find the Daintree River, where you can see huge crocodiles and bull sharks.

The flora and fauna you can see there is unique and unlike any other place in the world, with thousands of sea animals, sharks and molluscs.

Leaving wildlife aside, Cairns has an endless summer. Many young people take the opportunity to stop by and go out in one of its night clubs.

The natural beauty of the area must be considered along with the limited job opportunities that exist for those who seek a place in Australia for the longer-term.